Full Mic Shootout coming up on The VO Meter, www.vometer.com. Get a sneak peak here!

That’s a wrap on an event 2 years in the making. This past weekend, I attended the Mid Atlantic Voice Over conference, 2o18. The event brings together voice over artists, coaches, marketing and branding specialists and vendors from all over the world. I am extremely blessed that it occurs almost in my backyard in Herndon, Virginia. Val Kelly with Mid-Atlantic Voiceover, LLC  is the organizer, founder and all around Wonder Woman of the event, and I can’t thank her and her team enough for the fantastic job they do.

This year was dual purpose for me. I attended as a voice actor and was blown away by the amount of information presented by the amazing speakers. Hugh Edwards from Gravy for the Brain gave us all an accurate state of the industry to open the conference. Marc Scott, Tom Dheere and Rachael Naylor gave practical advice on running the business of voice over. Celia Siegel showed everyone how to brand their business properly, Brigid Reale and Dan Friedman offered advice for beginners. Then, the performance content was off the charts. Johnny Heller spoke about how to perform in audiobooks, then how to actually book them. Joe Cipriano had folks live reading to promos complete with video and SOT, Sunday Muse showed us how to embody a character. Finally, Sara Sherman and Kari Wahlgren demonstrated character acting in animation. Whew, I’m out of breath just recapping it all!

I also need to mention the first ever MAVO Kids Program. Sara Sherman took a group of lucky kids on their own private conference for the Sunday portion of the event. My Son and Daughter were part of the program and I could not be more impressed. They got to act out characters, live direct each other and even had an honest to goodness table read! They were on cloud nine when it was over and I can’t thank Val and Sara enough for providing that opportunity.

As I said, I was there for another purpose, representing my show The VO Meter, as the Official Podcast Partner of the conference. This allowed us the opportunity to interview all the presenters, sponsors and some of the attendees, LIVE on the show floor as it went on. We will be releasing some content every day for the next few weeks, culminating in a full episode in December. While my co-host Sean Daeley joined us over our sponsor, ipDTL for a few sessions, I have to thank Ken Foster for being my wing-man throughout the show. His support was invaluable.  We used the VOMO from our sponsor vocalboothtogo in order to conduct the interviews and it worked out great to cut down on ambient sound. The response to the show was fantastic. I have to thank Val again for the chance to be included with the amazing list of presenters.

All in all, MAVO 2018 was fantastic. Sure I came back with the conference “hangover”. Not in the sense you are thinking, but in the sense that after having such a great time with what really is my voice over “family” it’s tough to get back to work come Monday. That, however, is when it’s time to use all the practical knowledge we learned at the conference.

I’ll have to let the fond memories of the weekend carry me through until MAVO 2020 when I’ll be ready to do it all over again. Things like My side trip to Brad Hyland’s place on my way to the conference. Tom Dheere texting me wondering why I was late to happy hour on Friday. Being introduced to speak to the group following Celia Siegel and before Joe Cipriano, what? Nicola Richards welcoming me to karaoke for a truly TERRIBLE version of Power of Love (thanks for filming it Ana Clements) just after Armin Hierstetter did the “other” Power of Love I didn’t even know existed. Johnny Heller being cold all weekend, talking about Baltimore with Brigid Reale and Paul Schmidt, turning in early with Rama Rodriguez and Hugh Edwards on Friday night (who knew that was possible) and Joe and Ann Cipriano joining us for lunch and asking my kids BY NAME how their day went.

Till next time MAVO! 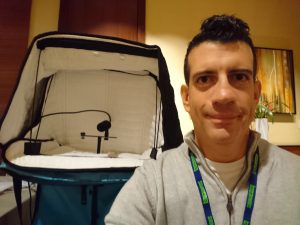